The story of FUD during dips, and why we saw a Tether campaign in the last few days.

Did you notice all of those gloom and doom Tether posts when the market dipped?

They were getting posted at least every 30 minutes. And it wasn’t something just on this sub, there was a lot of FUD on social media in general.

But there was nothing major or really new going on with Tether.

It was just Tether minting a few millions. But Tether burns and mints millions every month.

This is just what we get during every major dip.

After the major crash in may, we had a rain of negative stories about crypto. From China FUD to Tether FUD.

And some of the purest FUD started popping up again: 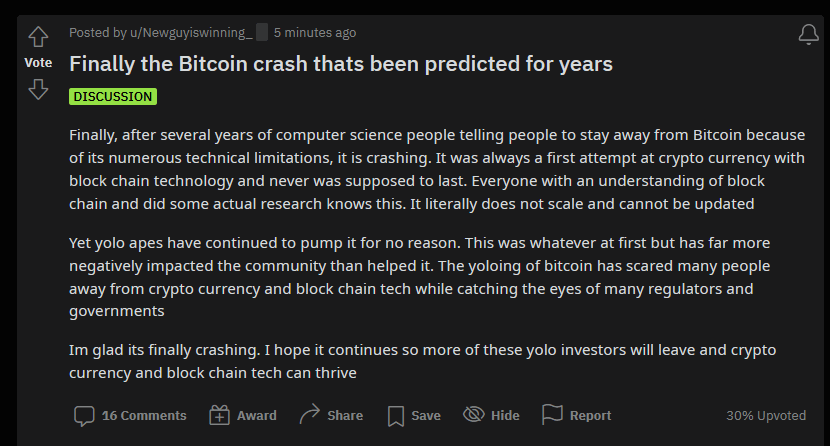 Why are we getting so much FUD?

2 main reasons: You have more people out of position (hence why the price is down), who don’t want to shill crypto anymore. They want a good re-entry point.

And you have anti-crypto people, who can’t really bash crypto effectively when everyone is bullish on it. No one is gonna listen to them when things look good. Their real window of opportunity is when things are really bearish. That’s when they can come out of their cave and be taken a little more seriously.

Why is Tether FUD so popular?

Mainly because there is not a whole lot left.

If you ever followed over the years the anti-Bitcoin sub called Buttcoin, you’d have seen that 3 years ago, they still had plenty of ammunition, and plenty of valid argument. But as adoption and usage continued to grow. Crypto became more serious and more established. And now crypto is offering more tech solutions than ever. Every year their arguments are dwindling down.

The last couple of big arguments were that institutional money was never gonna come in, and no country is ever gonna adopt Bitcoin as a currency.

So as you can see, there’s not a whole lot left.

Out of the few arguments they have let, their favorites is probably Tether.

Because they know no one is gonna argue that Tether is not shady, and what they do is no better than what’s been going on with paper silver, and to some extent with the dollar. The very things we were trying to move away from in crypto.

Is the FUD legitimate?

The part about Tether being a shady company, being in cahoots with Bitfinex, and probably not having anywhere near the fiat to back their coins, is probably all true.

Where they exaggerate, is with always mentioning how much they print to sound alarming, but never mentioning all the Tether they burn.

Also, Tether only needs to be backed up by supply and demand to function. And as long as they keep the supply balanced with minting and burning, the system will work.

The Evergrande connection is also unproven. But they love to be alarmists about it. That’s why we saw a lot of Evergrande posts again.

Tether collapsing is probably another exaggeration. If it was really that vulnerable all these years, and sitting on a house of cards, of all the times it would have collapsed it should have collapsed already during the bear market. A time when they were burning more Tether than ever.

A Tether collapse today, wouldn’t have the same effect as it did back 3 years ago when the ‘Tetherpocalypse’ theory emerged. Today, most of these major exchanges have these other stablecoin options. So that dominating liquidity in Tether, could now be transferred to these other stablecoins.

And finally, the theory that Tether is actually responsible for the price of Bitcoin, and is the only reason the price goes up, is a myth that has been debunked many times.

Including by 2 professors at Berkley who did a statistical analysis of this:

You can also see that Tether’s correlation is a lagging correlation by simply looking at the charts. I wonder why no one on the Buttcoin sub thought about doing that?

Watch Tether and Evergrande FUD diminish if the crypto market continues to go up.